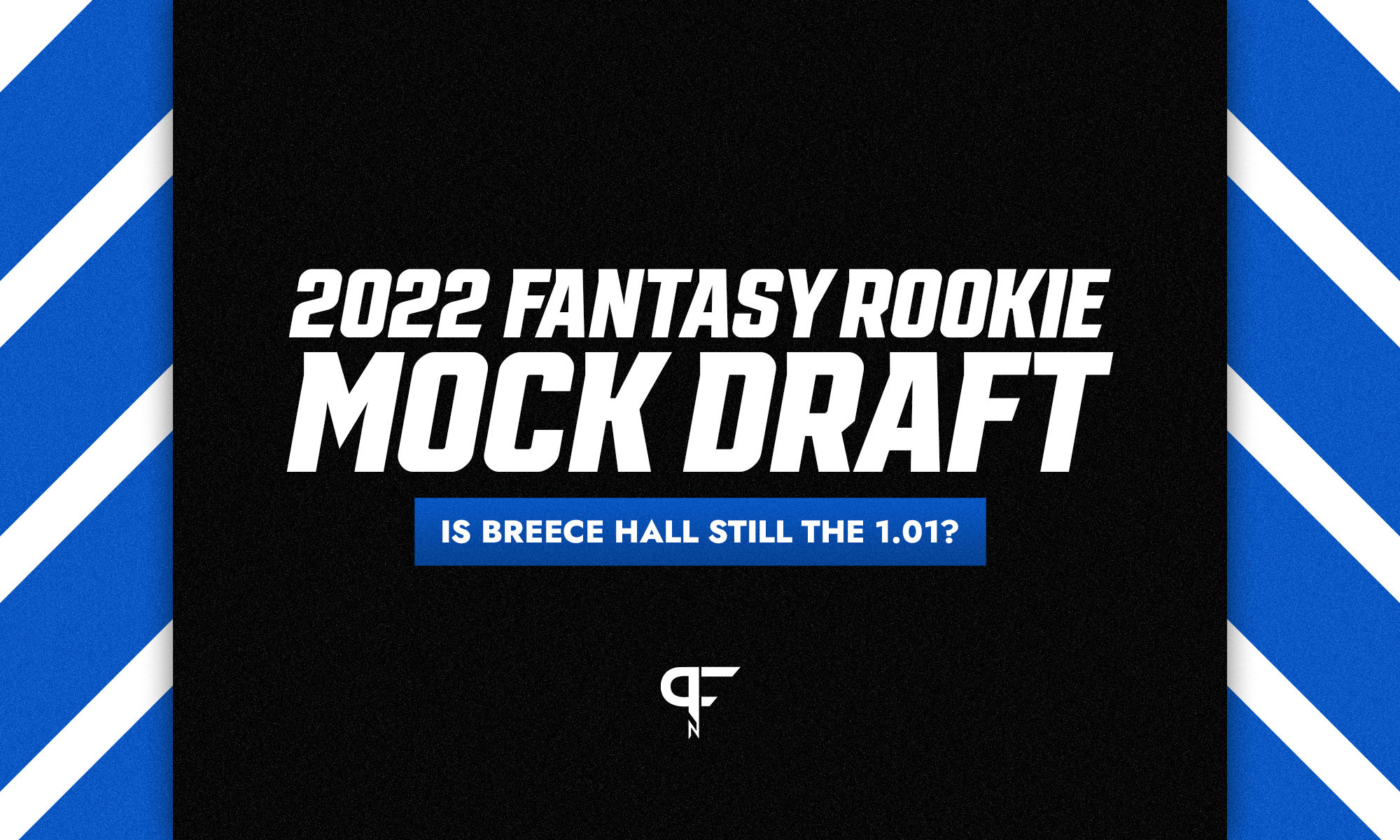 The 2022 NFL Draft has come and gone, which means it is time to see what rookie mock drafts may look like for dynasty fantasy football managers. Today’s mock will be for a PPR superflex dynasty rookie draft. How far did Malik Willis tumble? Is Breece Hall still the 1.01 with the Jets? Let’s find out.

Now that the NFL Draft is over, the last piece of the offseason puzzle is complete. For many of you, this means your dynasty rookie draft is coming up soon. Here is the first round of a 2022 PPR superflex rookie mock draft.

Some people were wondering if Breece Hall landing with the Jets changes things. Some people vaulted Clyde Edwards-Helaire above Jonathan Taylor because the former landed with the Chiefs and the latter with the Colts in 2020. In dynasty, we prioritize talent above all else.

JT was (and is) a vastly superior talent. Similarly, Hall is the best running back in this class, and it’s not close. If you have the 1.01, lock up a future three-down back for the next half-decade.

After Hall, I don’t have supreme confidence in any RB of this class to be a high-level fantasy contributor. Of course, others will produce, but we need more certainty at the top of our rookie drafts.

Enter Drake London, the Falcons’ de facto WR1. While the Falcons don’t yet have their quarterback of the future, the 21-year-old rookie will certainly be around (and entering his prime when they do). London was the WR1 of the NFL Draft, and he’s the first wide receiver off the board in your rookie draft.

Two Jets in the top three? I must be taking crazy pills. You have to hand it to the Jets — they’ve loaded up on offensive weapons. Garrett Wilson definitely has competition for touches between Hall, Elijah Moore, Corey Davis, and Braxton Berrios. With that said, we should believe in Wilson.

The former Buckeye was the second wide receiver off the board in the NFL Draft and had a top-10 pick invested in him. He’s the Jets’ WR1 of the future and the safest wide receiver in this class. While Wilson may never become an elite fantasy WR1, there’s almost no chance he busts.

This is where things start to get tricky. I have my doubts about pretty much every rookie beyond Wilson. Treylon Burks‘ production profile is impressive, but his athletic testing went worse than expected. I’m admittedly a bit concerned he may not be able to separate at the next level.

Nevertheless, the Titans invested first-round draft capital in Burks, and he’ll undoubtedly be a Week 1 starter opposite Robert Woods. He’ll get every opportunity to prove the doubters wrong, and I believe in his talent more than the next wide receiver on this list.

Putting Kenneth Walker III here is both difficult and necessary. Seattle invested second-round draft capital in Walker, and we know they want to run the football. Rashaad Penny looked great last season but has never proven he can stay healthy. Chris Carson, unfortunately, has likely played his last NFL snap due to a neck injury.

Walker is going to get significant burn as a rookie. He’s a strong two-down runner and could very well be the Seahawks’ lead rusher for the foreseeable future. However, unless he starts catching passes, there’s not much RB1 upside. Still, if you can find an RB2 out of him, that’s a win.

Chris Olave is an undersized four-year player drafted in the first round. The track record of this archetype is not great. One year into his career may be a bit early to declare him a hit, but the most successful sub-200-pound four-year WR of the past decade or so is DeVonta Smith.

Olave is fighting against history to be a relevant NFL player, let alone a fantasy asset. He was a catch-and-fall-down receiver in college with minimal after-the-catch production. This isn’t even about landing spot — it’s about prospect profile.

I know that was a lot of negativity, but sometimes in rookie drafts, we have to trust NFL teams blindly. Olave was a first-round pick and enters a barren WR depth chart. He will likely start Week 1, and that’s worth gambling on.

I very reluctantly put Kenny Pickett‘s name here. Much like the NFL teams, I don’t see any long-term successful starters. Unfortunately, the nature of superflex forces fantasy managers’ hands when it comes to quarterbacks.

Pickett was not only the first quarterback off the board in the NFL Draft, but the only quarterback selected in the first two rounds. He is far and away the most valuable in fantasy — he’s the only one we can reasonably project to start in the near future.

Mitch Trubisky is a bridge quarterback. Unless he plays well, Pickett will likely replace him at some point over the second half of the 2022 season. It would be a stunner if Pickett weren’t the Steelers’ starting quarterback in 2023. That alone is enough to give him fantasy value in superflex.

Despite his very late ACL tear, the Lions traded up for Jameson Williams in the first round. That tells me they believe in him and intend for him to be their WR1 of the future.

Although he may not contribute much as a rookie, Williams is set up well on a team rebuilding the right way. The Lions have put together a strong offensive line and now have a formidable WR group with Williams, DJ Chark, and Amon-Ra St. Brown. Soon enough, they’ll have a quarterback as well. Williams is 21 years old. Once they figure it all out, he’ll be there to reap the benefits.

The Falcons made Desmond Ridder the second quarterback off the board. Although he did not go until the third round, Ridder landed in a spot where he could reasonably get an opportunity to start early in his career.

This team is not going anywhere in 2022. If Mariota isn’t playing lights out, they will have no reason not to see what Ridder can do. He has mobility and decent fantasy upside if he gets a chance to start. At the very least, once he takes over, he’ll have enough value to trade if you want to.

I’m influenced by the Commanders’ draft investment here — maybe a bit too much. Jahan Dotson was the fifth wide receiver selected in the NFL Draft. He’s entering a wide receiver room with nothing certain behind Terry McLaurin.

Who knows if Curtis Samuel will ever be healthy? Even if he is, at worst, Dotson is immediately the Commanders’ WR3. And given his first-round draft status, he may quickly become their WR2. Dotson could also be their WR1 of the future if McLaurin ultimately leaves. There’s enough here to buy into the Commanders’ belief in Dotson.

This definitely feels a bit high since Skyy Moore was the 13th wide receiver off the board. I just really believe in the talent. Moore is a small-school early declare now going to play with the best quarterback in the NFL in Patrick Mahomes.

Moore will likely open the season behind Marquez Valdes-Scantling and Mecole Hardman (with JuJu Smith-Schuster in the slot), but he’s a superior talent to both of them. It’s only a matter of time before Moore becomes a starting wide receiver on one of the best offenses in the NFL.

Malik Willis went from a consensus top-two selection in superflex to a guy very difficult to evaluate. Given his skill set, he has the tools to be a top-flight fantasy producer if given a chance to start. However, he’s a third-round pick buried behind Ryan Tannehill, who is not close to the end of his career and not really at great risk of being benched.