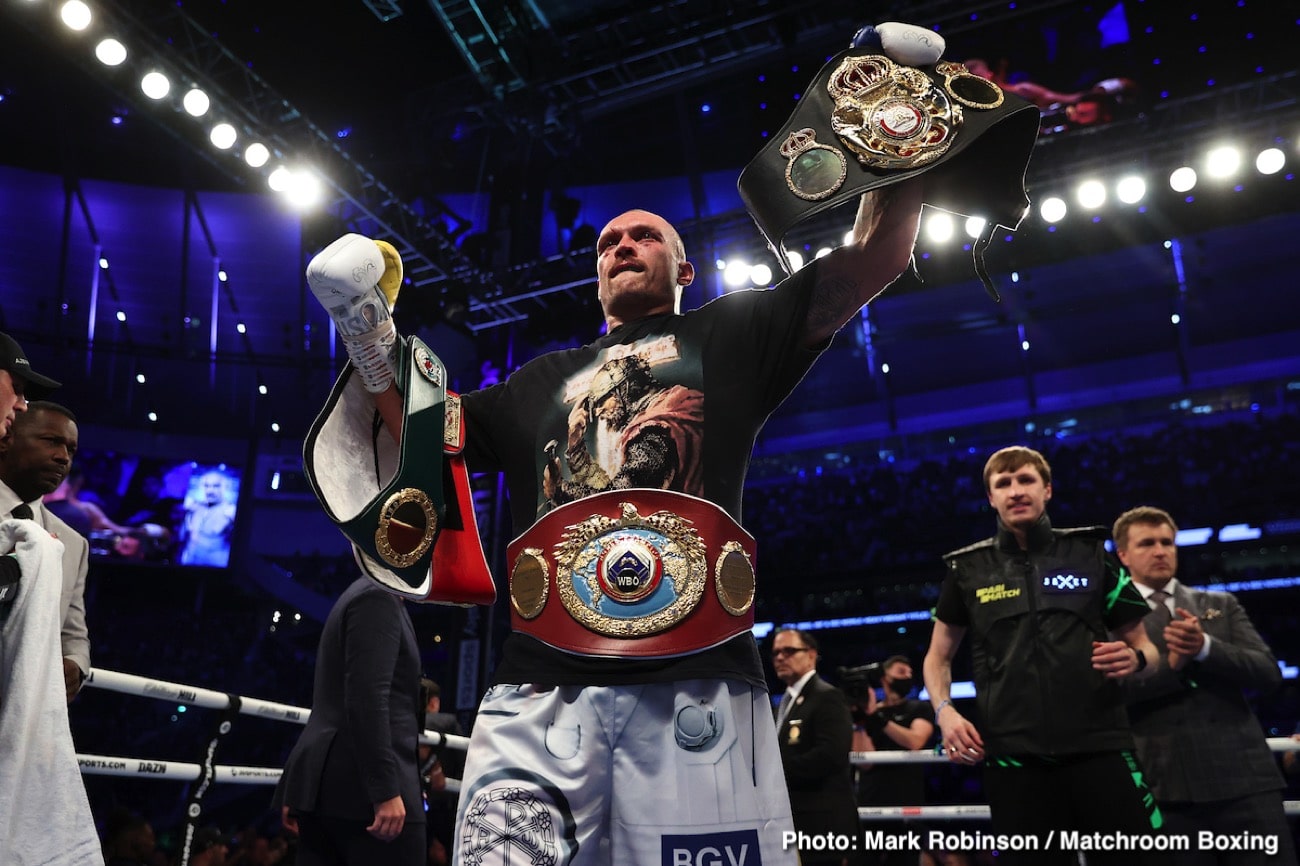 By Sean Jones: Oleksandr Usyk has decided to call Eddie Hearn’s bluff and is willing to come down to 201 lbs to fight Canelo Alvarez at heavyweight.

IBF/WBA/WBO heavyweight champion Usyk’s manager Egis Klimas reportedly is on board with his fighter coming down to defend against Canelo (57-1-2, 39 KOs).

This comes after Hearn mentioned in an interview with JOE_co_uk that Canelo told him that he wanted to fight Usyk at 201 lbs and that he would “beat him.”

Whether Canelo is serious about his interest in fighting Usyk remains to be seen, but the talented Ukrainian and his manager are ready to call his bluff.

Canelo would like nothing more than snatching the three heavyweight belts from Usyk, as he’s had a hang-up lately about his legacy, devoting all of last year to defeating a crew of paper champions from England and Tennesse.

Before Canelo can get a shot against unified heavyweight champion Usyk, he’s got two massive obstacles in front of him in fights against WBA light champion Dmitry Bivol (19-0, 11 KOs) this Saturday, May 7th, and then Gennadiy Golovkin on September 17th.

“Oleksandr Usyk’s manager Egis Klimas has declared that Usyk would be willing to come back down to cruiserweight (200lbs) again for a fight with Canelo Alvarez,” said Michael Benson.

Essentially, Canelo has to run a punishing gauntlet to get to a fight against Ugyk, and there’s no telling whether the Mexican star will get through those two fights without getting beaten.

This Saturday night, Sean Jones sees a disaster awaiting Canelo when he moves up to 175 to challenge the unbeaten Bivol in their headliner on DAZN PPV at the T-Mobile Arena in Las Vegas.

“He genuinely believes he can beat Oleksandr Usyk for the world heavyweight title. He said to me, ‘If you can make that fight at one pound above cruiserweight, obviously was a cruiserweight, I will beat him,” said Eddie Hearn to JOE_co_uk.

“I find it hard not to believe him. Canelo comes from a tough upbringing in Mexico,” Hearn said.

It’s excellent that Canelo has still found success despite not being born from a privileged background in Mexico, but I don’t think that will matter when he gets inside the ring with Bivol.

If Canelo loses to Bivol, he won’t need to worry about fighting Usyk because any interest that might have been for a Canelo-Usyk clash would be washed away.

Usyk has his small hurdle to get out of the way with Anthony Joshua’s rematch, whom he beat last September. That’s a far easier fight for him than Canelo has in front of him with Bivol and Golovkin.