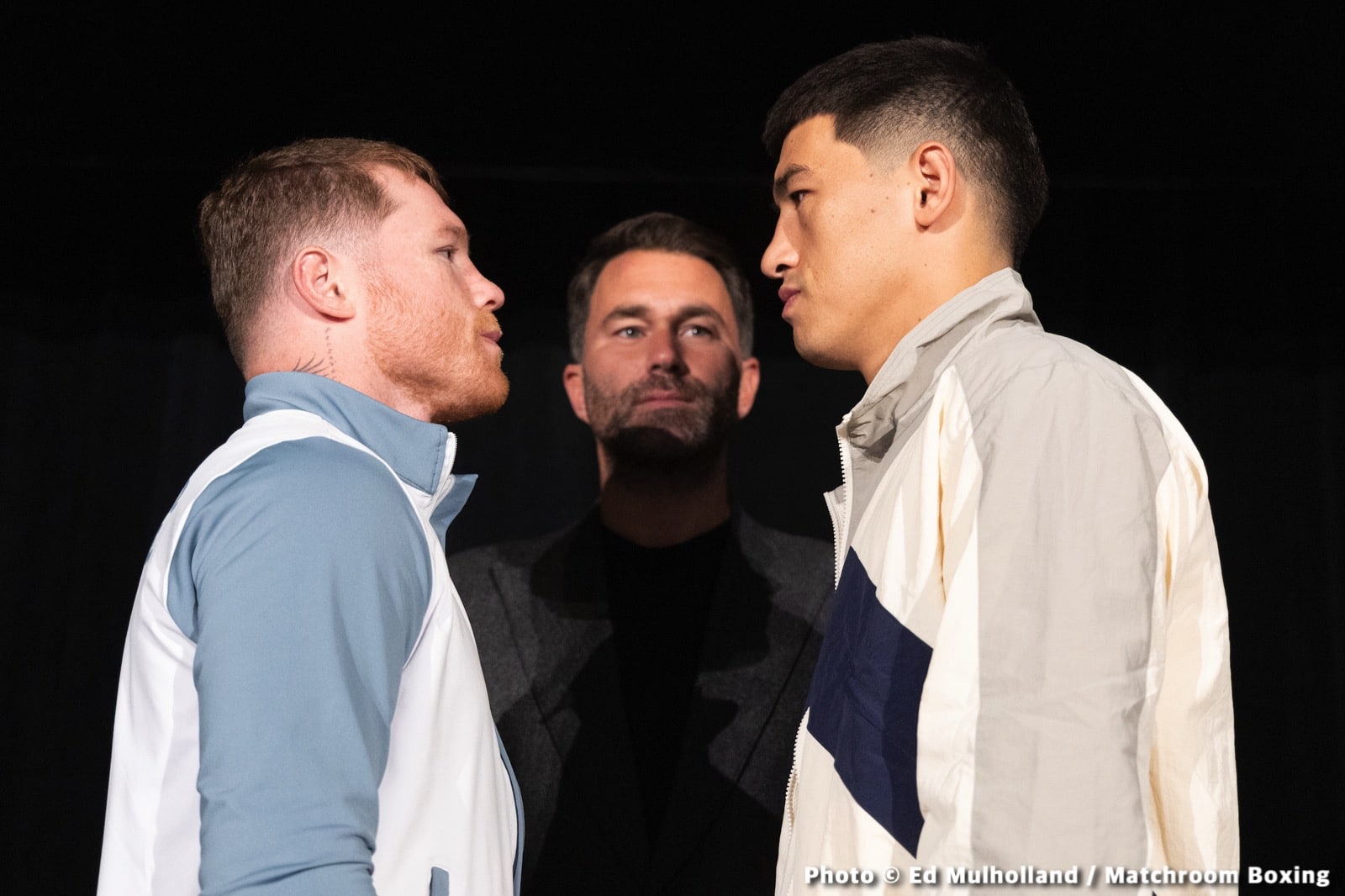 By Huck Allan: Eddie Hearn says Dmitry Bivol is a “bigger physical threat” for Canelo Alvarez than the fighters he’s been fighting in the last four years, and he feels this is going to be a “dangerous” fight.

Hearn states that Canelo (57-1-2, 39 KOs) will get beaten by getting out of his “comfort zone” against a bigger fighter in a weight class that he shouldn’t be fighting in the first place.

According to Hearn, the 175-lb division is one that Canelo should NOT be fighting at. The Mexican star is asking for trouble in taking on what could be the best fighter in the light heavyweight division in WBA champion Bivol (19-0, 11 KOs).

Canelo and his trainer Eddy Reynoso have done their homework studying Bivol, but we could see another miscalculation.

It was Reynoso who is believed to have decided that Oscar Valdez had the talent to take on Shakur Stevenson last Saturday. As it turns out, Reynoso was horribly wrong because Valdez was way out of his class in taking on Shakur.

Bivol has defensive skills similar to Stevenson but with more size and a lot of pop on his punches.

“I think they were all good opponents, the ones you mentioned, and they were all world champions in the division,” said Eddie Hearn to Fighthype when asked why Dmitry Bivol is better than past Canelo Alvarez opponents Billy Joe Saunders, Caleb Plant, and Callum Smith.

“Dmitry Bivol is on the same level as those guys, but a much bigger physical threat to Canelo Alvarez,” Hearn continued. “The only way Canelo is going to get beat is to move out of his comfort zone as far as weight divisions. He’s already doing that at 175.

Прочети:  Sergey Kovalev vs. Fanlong Meng on March 12th in LA on Triller

“Dmitry Bivol, the difference with him is he lives the life. He’s incredibly fresh and has never been in a tough fight.  He’s never been damaged in a fight. He’s got great feet, great fundamentals, he can punch, and he may be the best light heavyweight in the world. [Artur] Beterbiev is a different type of style.

“This is a very dangerous fight. I put it up there as one of the most dangerous fights Canelo has had. Everyone just presumes that in Canelo’s fights that he’s going to stroll through these guys.

“But in these weight categories, this is where the danger lies for Canelo Alvarez against a big, strong, fresh light heavyweight. You saw him struggle against [Sergey] Kovalev.

“He was behind going into the 11th round. Kovalev was not fresh; Kovalev was not in his prime. He was still a very good light heavyweight, but Bivol is different. Saul pointed that out,” said Hearn.