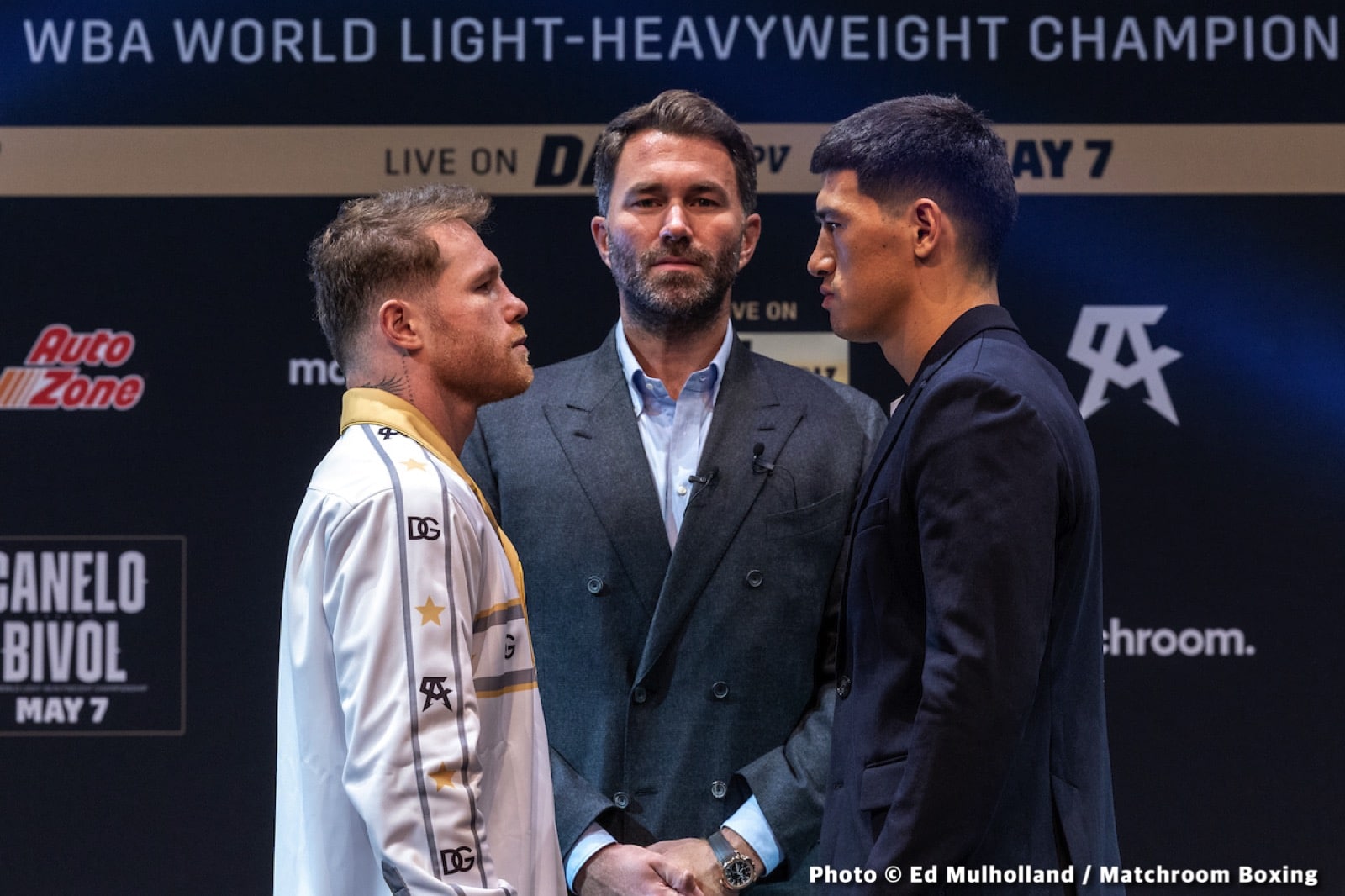 By Huck Allen: Canelo Alvarez says he will start quickly against Dmitry Bivol this Saturday because the WBA light heavyweight champion has excellent stamina.

Canelo (57-1-2, 39 KOs) will have one huge hurdle for this fight against the bigger, stronger Bivol is his anemic work rate. Canelo is a counter puncher who never had a high work rate even when he was younger.

Now that the 5’7 1/2″ Canelo is in his 30s and fighting in a weight class well above his best weight of 154 lbs, his punch output has dropped dramatically to next to nothing.

It’s going to be next to impossible for Canelo to outbox Bivol if he’s only throwing 15 to 20 punches per round unless the judges focus on who lands the harder shots.

In Canelo’s only fight at 175 against Sergey Kovalev in 2019, he fell behind immediately and was getting outboxed by the diminished, past his best 36-year-old WBO light heavyweight champion.

Bivol (19-0, 11 KOs) is a much better fighter than Kovalev was back then, and he’s also arguably a far beyond the supper middleweight champions that Canelo beat in the last two years to become the undisputed champion.

“With Bivol, I need to start early in the fight because he has the stamina for 12 rounds, ” said Canelo to Matchroom Boxing.

Canelo will need to throw more punches and not get too caught up with using the high guard come forward style that we saw from Oscar Valdez in his loss to Shakur Stevenson.

Прочети:  Anthony Joshua vs. Tyson Fury will happen in late 2022 or early next year

“For me, he’s the best,” Canelo said when asked if the 31-year-old Bivol is the best at 175. “Beterbiev, he’s strong, but he just goes forward, but Bivol, he’s strong, smart, and knows how to box.

“He has everything and has a great jab. I expected that, and I prepared for that. We prepared with Eddy [Reynoso] with a lot of head movement. Eddy threw me a lot of jabs,” said Canelo.

“This is just another step in history in going to 175, unifying those titles against bigger, stronger fighters,” said Reynoso about Canelo. “He’s [Bivol] one of the best keeping it at a distance, not taking chances .”

“I think Saul ‘Canelo’ Alvarez can go on and unify the light-heavyweight division after beating Dmitry Bivol this weekend,” Ricky Hatton said to the Metro.

“Having said that, I think this will be the toughest fight of his career since losing to Floyd Mayweather,” said Hatton about Canelo.

“He showed against Sergey Kovalev in 2019 that he can carry the weight with him and put it on against a much bigger guy,” Hatton said.

“I think Bivol is a bit fresher than Kovalev, a bit sharper, and, of course, undefeated.

“He has certainly got the power and strength to move through the weights, which is also due to his fantastic defensive ability. He deflects the weight advantage of his rivals,” said Hatton.