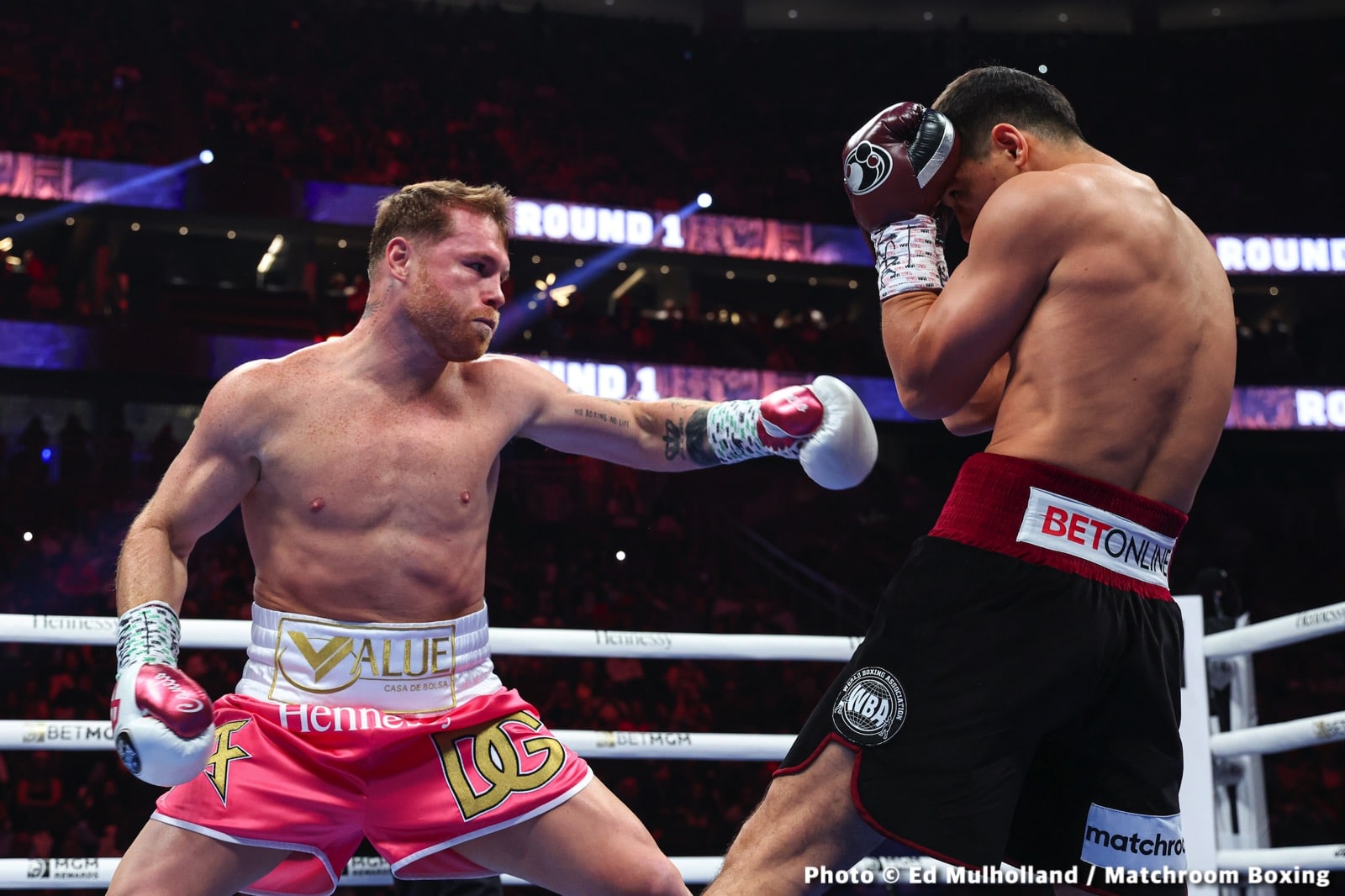 By Matt Lieberman: Canelo Alvarez may have made a mistake by not fighting as hard as he needed to defeat WBA light heavyweight champion Dmitry Bivol last Saturday night.

If that’s the case, it would help explain why he didn’t fight harder in the second half when Bivol pulled away on the judges’ scorecards, winning seven of the last eight rounds.

Canelo only won one round from the fifth through the twelfth, and that was the ninth. There weren’t enough punches thrown by Canelo in many of those rounds, and he wasn’t landing in double digits.

To defeat Bivol, Canelo should have been throwing 80 to 100 punches per round, and he wasn’t coming anywhere close to those numbers.

Frank Smith of Matchroom Boxing believes that Canelo didn’t fight as hard as he needed to in the last half of the contest because he thought he was winning the fight with what he was doing.

Canelo was landing the harder shots throughout the fight, even in the second half of the match.

What may have hurt his chances of winning was how tired he looked in the later rounds and how Bivol was able to land combinations on him.

Canelo will need to decide soon which direction he’s going to take for his next fight because Bivol isn’t going to sit around and wait.

He’s got to defend his WBA 175-lb title against the winner of the Joshua Buatsi vs. Craig Richards title eliminator on May 21st.

“A little bit wider than that,” said Matchroom Boxing promoter Frank Smith to Fight Hub TV when asked about his thoughts on the 115-113 scores turned in by the judges in favor of Bivol over Canelo.

“Maybe I had it 2-2, but I think I’m not the best scorer of a fight, but I think Dmitry Bivol won,” said Smith. “He’s [Canelo] never shied away from a challenge. I think he’ll do the rematch again.

“That’s what he’ll have the hunger for to go back in there and try and defeat him again. Bivol, I’ve known and worked with for five or six years. I have a great relationship with him and Vadim as well.

“We put on great events, but we can’t do anything about results. That is where our business ends. That’s for the fighters to go and do. There are huge nights to come, and Canelo will be back again, and Bivol will be back again.

“I don’t think you can make any excuses. He hasn’t made any excuses, but I don’t know what went wrong. He went in there against a guy that was very good in Dmitry Bivol, and Canelo has shown how good he is for years, and years and years.

“He’s the pound-for-pound #1 in the sport. Maybe it was the weight, as someone asked him at the press conference. Again, Dmitry Bivol put on a great performance and went in there with a game plan and executed it.

“I’m not the expert; I’m not the trainer,” said Smith when asked what Canelo must do to defeat Bivol in the rematch. I can’t really tell you.

“As he [Canelo] said, he thought he was winning the fight. So maybe he didn’t have as much urgency to go in there. Maybe he could have put more power shots in there.

“Let’s see what happens. First, the focus is on Dmitry Bivol. It was a great win for him tonight. Canelo is going to take some time, and then let’s see where we go from there.

“The Golovkin fight was based on him [Canelo] winning tonight, but let’s see. He said he wanted to take some time and decide what he wanted to do and go from there,” said Smith about Alvarez.